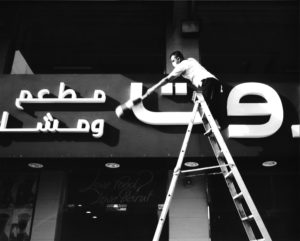 Click on the image to see the full Transient work

Ethnic breakdown. Approximately 85% of the expatriate population (and 71% of the emirate’s total population) was Asian (chiefly Indian, Pakistani, Filipino, Bangladeshi and Sri Lankan). About 25% of the population have Iranian origin. About 3% of the total population of Dubai was categorized as “Western”.      (source Wikipedia).

The underlying narrative in this body of work is not of place, but rather social movement and transition of a migrant workforce. It captures the temporary nature of the urban landscape in a place in which over eighty five percent of the population lives today, yet will one day have to leave. The immigration laws in the United Arab Emirates (UAE), welcome migrant workers, but equally ensure that they leave when there is no more work, or when they retire.

This body of work seeks to celebrate Dubai’s cultural diversity. While many of the subjects have grown up in vastly different backgrounds to my own, we share a similar story. We are all in this country to earn money to support our families, and to create a better future for the time when we return to the place that we call home. We all find a way to live peacefully together, despite our differences. We all enjoy the winter climate, and equally, we all sweat during the blisteringly hot summers.

This work examines not only the identity of a physical area, or the highlight the breadth of cultures, but to create a picture of the transient nature of individuals in a social environment unique to the Middle East. In doing so, the temporary nature of the majority of the population is highlighted, thus creating a depth beyond the clichéd contrast of hand loaded wooden trading vessels moored next to a road bustling with expensive Japanese 4x4s.

Here we have Iranian, Indian, and Pakistani workers and merchants who are at the coal face of the Dubai trade machine, Emirati women shopping in the souqs watched on by tourists from Oman, Saudi, Korea, China and the West.

Embedded in this series of images is another contrast too. Some nationalities, particularly those from the East are literally honoured to have their image taken. It is common to be stopped as I walk the streets and docks, by men asking me to take their picture. Yet, for now, they live in a completely different society. One which has designed and implemented some of the most protective privacy laws in the world. In every aspect of creating and compiling this body of work, I have operated within a legal framework that is rigorously designed to preserve the ideals and individual rights of the most conservative groups in society against the modern intrusions of the paparazzi and social media.

Prints can be ordered through The Empty Quarter Gallery in Dubai.