“Modesty is the colour of virtue” developed through serendipity. My job collapsed during Lockdown and wife Liz and I were about to move back to the UK.

I had an odds and sods box of film which I decided to use up. I started taking images of the local area. Initially there was no real aim, or objective. But as I developed and scanned the film I started to notice a narrative evolve… 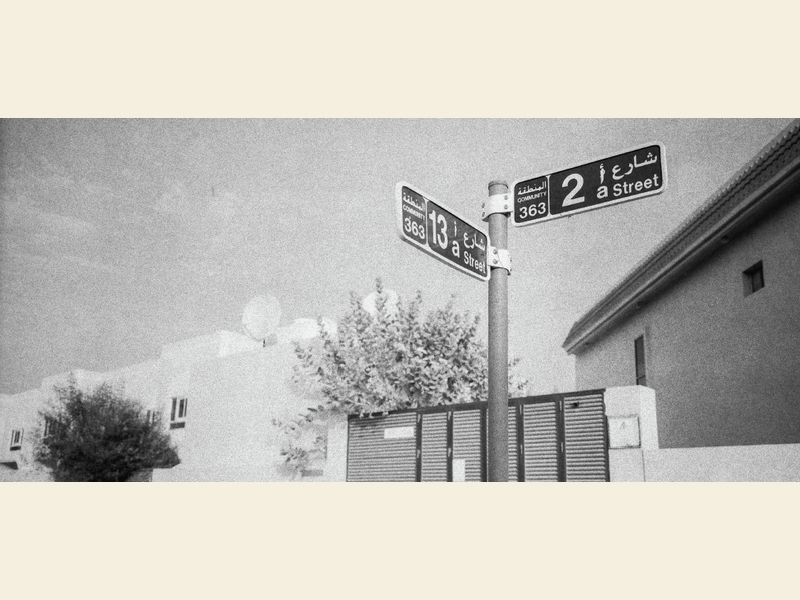 Ask many people in the West about modesty in the Islam world, and they will think of a Muslim woman’s head scarf or hijab. However, in the world of Islam modesty extends far beyond clothing. It governs the expected behaviour of both sexes and it influences many aspects of everyday life including architecture.
It is perhaps ironic that Dubai’s architectural heritage has its lineage rooted in taxation. In 1899, the administration of taxes in Southern Persia was placed in the hands of Belgian bureaucrats so that revenues could be increased for the Qajar government. This in turn drove merchants from the southern Iranian cities of Bastik and Lingeh to Dubai.
They brought their architecture with them and started building on the southern side of Dubai’s Creek. Instead of constructing buildings from palm fronds (Areesh), the new immigrants constructed buildings from coral rock. These new buildings featured wind towers (Barjeel) for cooling, and all of the rooms faced into a central courtyard, an architectural reference to The Garden of Paradise. The only external windows were in the Majlis, the men’s meeting room, and so the design ensured the modesty of the inhabitants, particularly the women and children.
At the same time that the wealthier Arabs copied these designs, the population continued to grow and Dubai transformed from a village into a town.

When the Shah of Iran abolished the traditional veil for women in 1936, many Iranian Sunni families moved south across the Straits of Hormuz to create a new family life in Dubai further reinforcing the demand for this type of building.
Many of the architectural features of these now historic buildings continue to be implemented today, albeit they are re-interpreted in concrete instead of coral. Compounds of villas, and sometimes individual houses are surrounded by high concrete walls. Inhabitants modestly slip from their air-conditioned houses into air-conditioned cars and drive away to air-conditioned malls, schools and offices.
To a Westerner, this style of building forces an unfamiliar lifestyle. Street signs may denote a Community Number, but this design coupled with Dubai’s blistering hot summers leads to a very insular life. Islam dictates a strict demarcation between public and private life, and today’s architecture still enforces the ideal that the home is a sanctuary for one’s family. It certainly deals with the issue of nosey neighbours.
However, if one looks carefully enough at residential streets of Dubai, there is life. Filipino maids walk dogs and children and wait patiently outside the houses that they have just cleaned. Pakistani gardeners cycle between villas, sometimes with a lawnmower in tow. Delivery “boys” (who are in fact grown men) ride motorbikes, each with a storage box on the
back, providing a door to door service which brings food, shopping, and everything else that can be carried straight to the household consumer on a 24×7 basis. Maintenance men arrive in white pickups with a lattice structure built over the tray.
My friend Susan Koruth was raised in Dubai. She had lived in the leafy suburbs of Sydney for a while, and that she describes` the lack of walls un-nerving. In Australia the front lawn ran right to the footpath and the only demarcation was where grass turned to tarmac. “I kept thinking, what if someone came in? Of course, they never did”!
As a Westerner, one is expected to drive. Walking the streets is only expected if one has a dog. Or maybe a child in a pushchair. The rows of external walls join together to protect entire neighbourhoods. I have always felt that this created a sense of distance from the place and constantly reinforces the notion that whilst I am made to feel very welcome as a guest, I am equally expected to conform.

image.Photography is the home to British photographer and artist Christopher Osborne. Christopher’s practice is based around photography, however he has also strayed into mixed media and sculpture.

Prints are still available for some works. Drop me a line on our Contact Us page, and I’ll get back to you.